When German automaker, Volkswagen, comes to mind… you don’t think of pickup trucks, just quick turbo charged hot hatches. Well, Volkswagen does make a handful of pickups, although they’re not offered in the U.S., they’re nothing short of awesome. The Amarok has been around for a little while now, which left Volkswagen advocates in the U.S. drooling from the mouth especially since the announcement earlier this year that they may make their way to the Americas depending on activity and behavior within the truck market. More recently, the Saviero debuted in Brazil. Now, Volkswagen unveils their new pickup concept—the TRISTAR— at the IAA commercial vehicle motor show in Hannover, Germany. 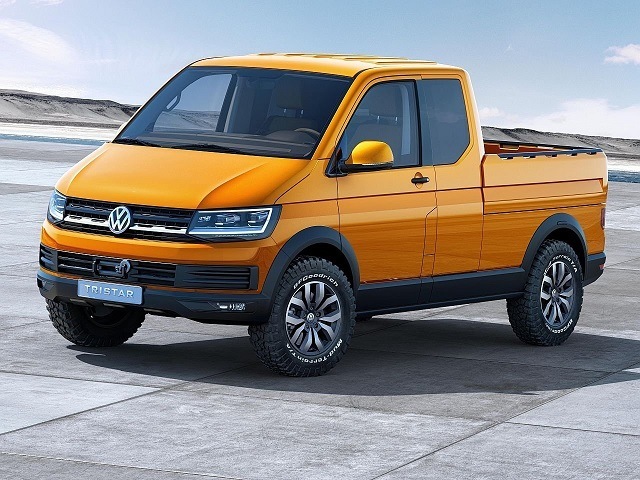 The TRISTAR is a mix between Volkswagen’s T-series vans and a pickup truck, and the design it bears will more than likely be the solidified design for the next-gen commercial vehicles. Big difference is, it will just sport a short compact bed, extended cab, and short wheelbase.

The convenient truck bed is actually split into two parts, the first being the open truck bed with a full-size spare tire mount, and the other consisting of a watertight compartment underneath the bed floor. Aside from the increased cargo flexibility, the Tristar is also equipped with 4MOTION all-wheel drive, a beefed up suspension system with locking rear axel to allow complete maneuverability across any terrain.

Within the TRISTAR is quite the opposite of its outdoorsy features. It’s host’s a 20-inch foldout tabletop tablet computer and an onboard espresso machine packed into a very clean, stylish, roomy cabin space. Under the hood hides a 2.0-liter four-cylinder TDI engine capable of 200 horsepower and 332 pound-feet of torque paired with a seven-speed dual-clutch transmission to deliver power to all four wheels that, according to Volkswagen, can deliver the TRISTAR to 62 miles-per-hour in 10 seconds.

Future Possibilities for the Wild West

The TRISTAR is essentially a perfectly well rounded utility vehicle that is suitable for anyone from an office-dweller who loves to go off-roading to a film crew. It is the future of mobile high-tech offices, and it’s surely going to be welcomed by consumers if it is produced.

There’s been word of sales in the U.S., and would ultimately prove to be a worthy action seeing vehicles like the TRISTAR have gained quite a bit of attention within the last few years. And if it did indeed make it’s way to the U.S. it would surely reign supreme amongst the competition, and would certainly gain traction on competitor’s eyes as to what they’ve been doing wrong all this time. Let’s hope the U.S. market is deemed suitable and the Volkswagen offerings expand to more hauler-friendly variants.