Have you ever wondered where in the world your Volkswagen came from? Have you always believed that your VW comes straight from VW headquarters in Wolfsburg?

If you’re curious about the origins of your car, there are couple of things you can do. First, you can check out the VIN number (more on that below). Second, you can check out our new map of VW plants around the world, which will show you where VWs are built and give you an idea of just how big VW really is worldwide. 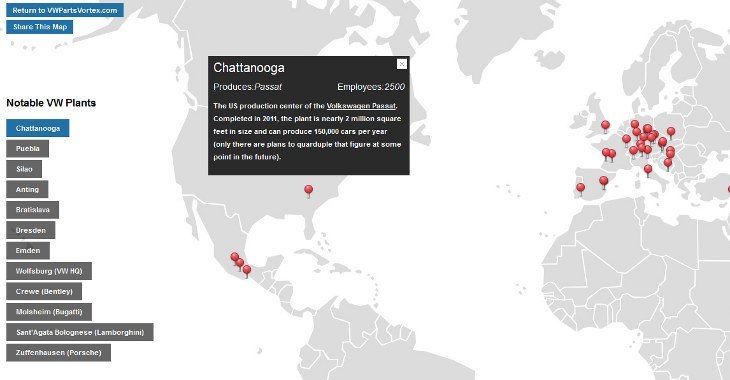 Check out our world map of VW manufacturing plants – click the image above.

The first digit in any VIN number indicates the country of origin. Most VWs VIN numbers will therefore start with a “W” or a “3”, which indicate either Germany (W) or Mexico (3). Here’s a list of country codes:

If you’re wondering why Germany is a “W” instead of a “G” – or why England is an “S” while Sweden is a “Y” – the answer is that the alphabet and digits 0-9 were lined up in order, broken into chunks by continent, and then further subdivided by country.

Europe, for example, has the “chunk” of letters from S-Z. Asia gets J-R. North America gets 1-5. Etc. You can see how these codes and numbers break out in this wikipedia article.

Looking At Our Map

While not quite as scientific as looking at your VIN number, looking at our new map of VW plants will show you where Passats, Jettas, Golfs, etc. are all built all over the world.

The map will also show you where some of the more famous/notable VW plants in the world are located, including the Crewe plant (which builds Bentleys), the Sant’Agata Bolognese plant (which builds Lamborghinis), the Molsheim plant (builds Bugattis), and of course Wolfsburg.