Audis are born great, we all know that. The four rings signifies quality, class and breeding.

Aside from the R8 and RS models, though, Audis also tend to be conservative. It’s the prestige car for the masses and the likes of the A4, S3 and TT have to serve a common goal.

These don’t. These are some of the finest tuner cars in the world. These were conceived to be the fastest, wildest, most extreme versions of the German classic to hit the road. So feast your eyes on what is possible when engineers are freed from the constraints of cost, usability and pure sanity.

We think you’ll like them too. Tell us your favorites, as well, this is always going to be a subjective list and the start of a discussion, not the end… 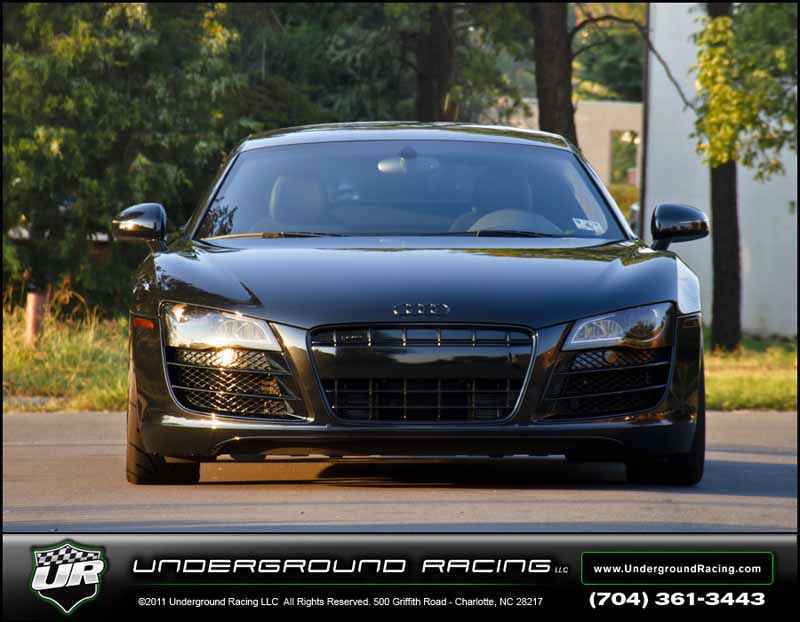 The R8 changed the game for Audi, creating a halo car that took the fight to the Porsche 911.

The V10 especially, is about as serious as sportscars get, but there was always an intriguing possibility. The engine is, essentially, not that dissimilar to the RS6, which means it can take twin turbos. Once that leap of logic is overcome, the sky is the limit in terms of power.

Underground Racing has never done things by half and was famous for its twin turbo Gallardo long ago, so with the same engine it was always going to build this car. Strengthened internals join forces with the forced induction to produce more than 1200bhp with normal fuel.

Get hold of race fuel, though, and things get silly. It will give 2000bhp, twice as much as the original Bugatti Veyron, and immolate all four tires on demand.

The engine mods cost more than $109,000, so you can almost buy two R8s for the price of this one. But then this is Veyron plus power in just over half the weight. You want it, don’t you? 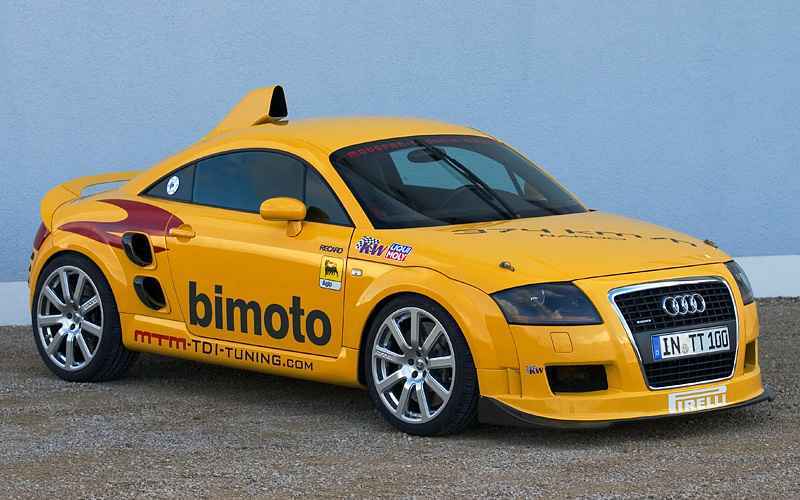 The TT is like the ginger stepchild of the sportscar world. It sold in huge numbers, but purists simply don’t respect the car and it has become the preserve of spoilt little rich girls and junior real estate agents looking for something with attitude.

This car has a secret weapon: an extra engine.

That’s right, Roland Mayer’s outfit created a twin-engined TT as a pure marketing exercise and produced one of the most violent machines ever to wear the badge. It’s a Quattro, but not in the conventional sense, because the front and rear axles get their own 1.8 Turbo four-cylinder engine and transmission.

Making both work in tandem is an engineering masterclass all on its own.

The TT has the potential for 1000bhp, although Mayer opted for a sensible 740bhp for daily life…

Mayer will genuinely sell you a road-legal car, too, for the bargain price of $800,000. 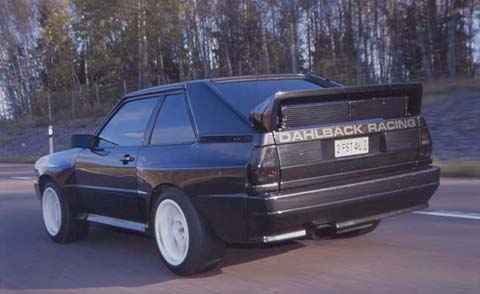 True Audi fanatics will go weak at the knees and have to wipe a little drool from their mouth at the mere mention of the Ur Quattro.

The most exotic classic Audi and the basis of the almighty S1 Group B rally car that is scorched in to our brains, the Ur Quattro goes for massive money in unmolested condition when they turn up at the auctions.

But Swedish company Dahlback Racing doesn’t do unmolested, they do fire breathing monsters.

Unbelievably for a car that was born in the 80s, this machine has 600bhp at its disposal, as well as a six-speed gearbox and a 198mph top end speed. 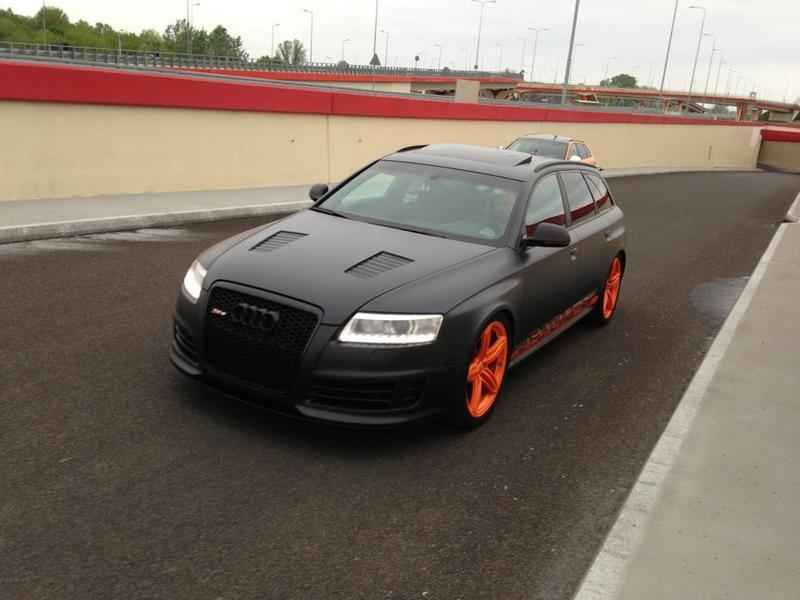 The internet is full of loose references to 1000bhp Audi RS6s, but try really finding one that isn’t a pure drag car…

This, from Polish tuner Sportmile, looks the most credible and a Russian owner has used his to devastating effect, beating Lamborghini Aventadors and other exotica at the legendary Moscow Unlim drag races that give drives the chance to chase the top speed over a much longer distance than a quarter-mile.

The R1K looks subtle enough, but it is just stupid, stupid fast.

Having driven the 730bhp MTM version I can vouch for the bizarre feeling of G-force under hard acceleration, because the four-wheel drive and the vehicle’s weight combine to create a feeling of calm despite the insanity at the wheels.

The RS6 is a bit of a one-trick pony, it still won’t be the most exciting car to drive. But you have to love a machine that could move the family furniture at Mach 1… 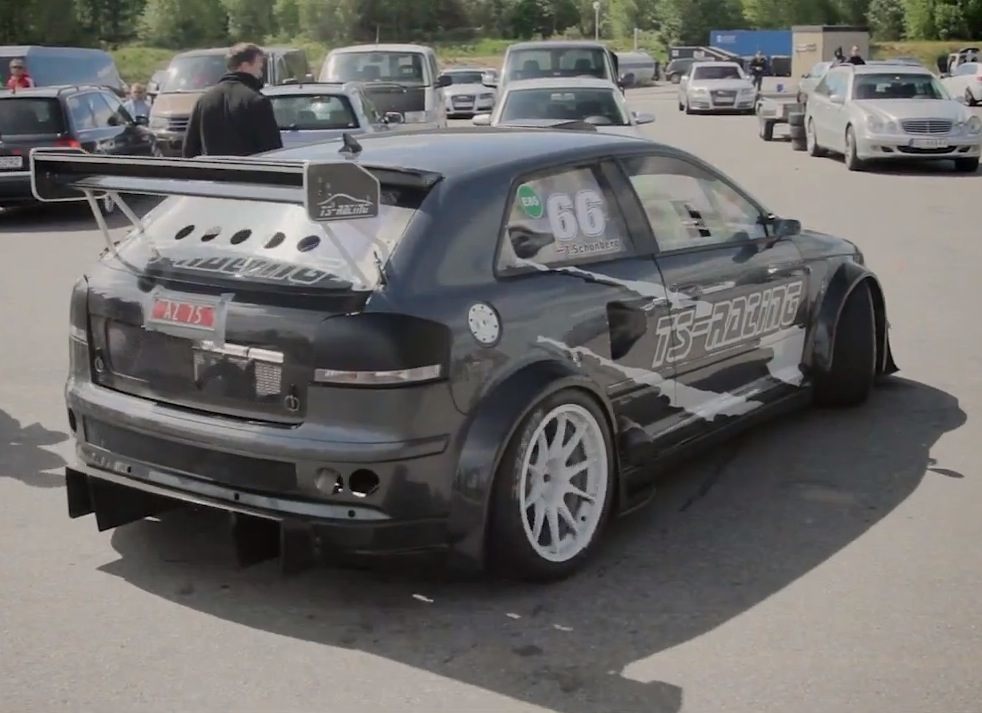 We wanted solely road cars for this piece and tried to ignore drag cars, because they’re not really in the spirit of the game. This is a track car, though, which sits somewhere between the dark world of motorsport and the road, and it’s just so cool…

This is Tommy Schonberg’s own car and he has gone to town with the mods to create a true legend in Audi circles. With 1074bhp and 854lb/ft of torque, this car is just a weapon and the aerodynamics, suspension, just about everything make this one of the most potent cars you’ll ever see.

It’s safe to say a Veyron wouldn’t see which way this went on a track day, as it can match the big Bug on power and yet weighs about half as much.

I want to drive it, today, even though I know it will kill me… 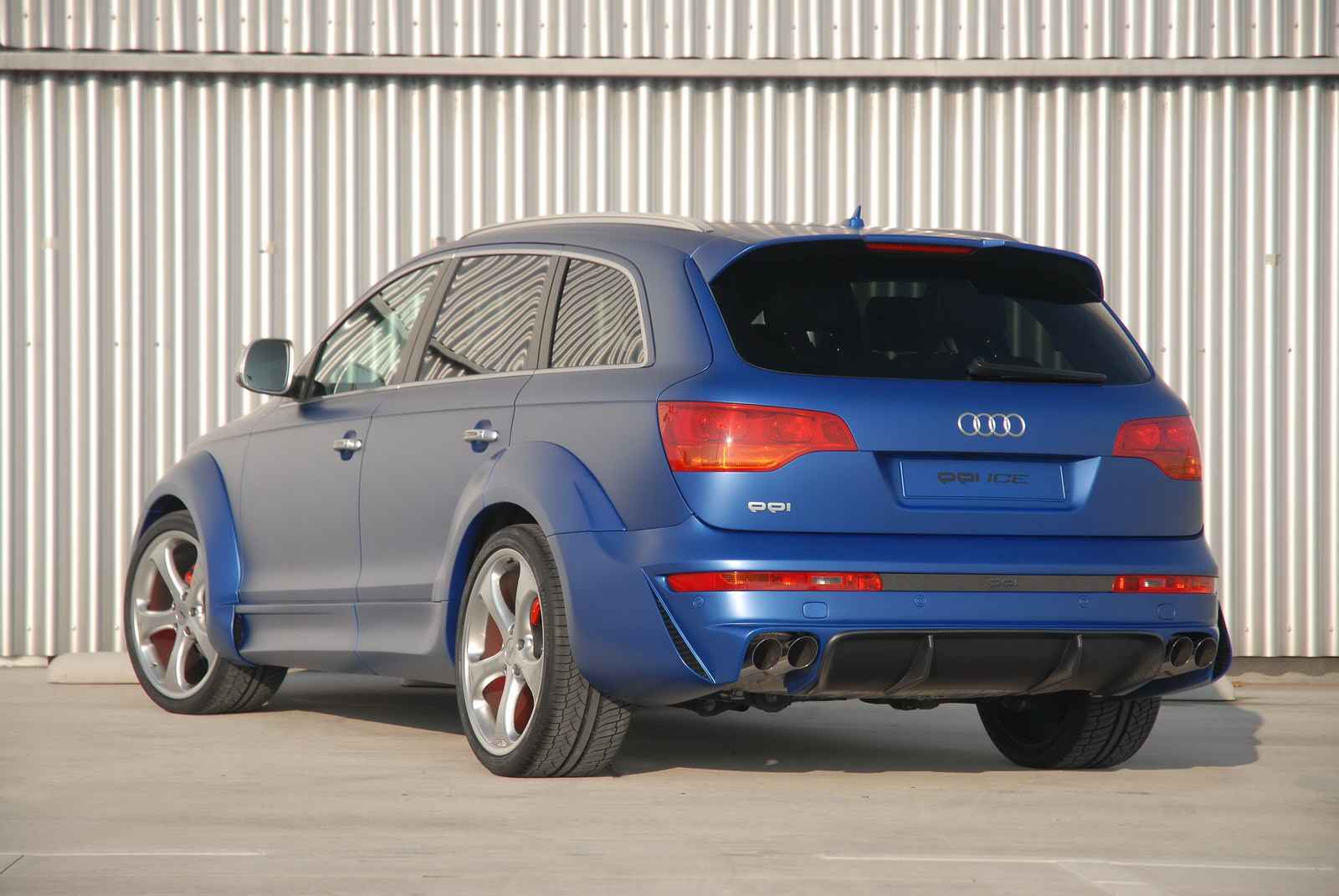 The Q7 was never a particularly effective riposte to the Porsche Cayenne and Range Rover Sport, except in V12 TDi trim. That car was a dinosaur, an almost wilful one-finger salute to the increasing demands for frugality at the expense of fun.

It was a stroke of genius, shoehorning an absolutely unnecessary diesel lump into a bigger aluminium and iron lump. There was no possible justification for the V12 Q7, which made it perfect for the PPI treatment.

Had Underground Racing not gone mad with the turbos then PPI would have taken the honours with its R8, too. It’s a fledgling firm that made a big impression with a couple of monumental builds, with this being the other one.

There is nothing subtle about the Ice, it is a butched up version of the slightly effeminate Q7 that would leave the Porsche Cayenne Turbo weeping in the shower.

It’s a hard-edged beast that can hit 60mph in 5.3s, despite weighing more than the average tank. It cost up to $350,000, too, which is almost as frightening as the looks. 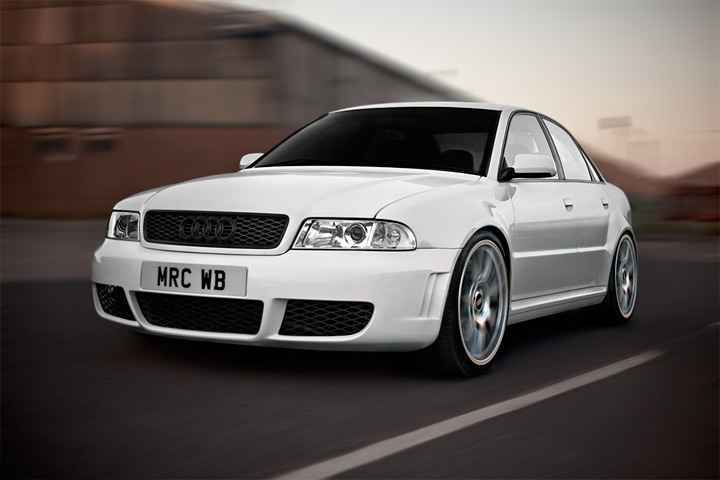 The B5 RS4 would have been the obvious choice, it was the classic fast Audi saloon after all. But then UK-based MRC Tuning did such a beautiful job with the lesser S4 that it had to take the prize.

The deseamed monster comes with 700bhp from a 3-liter powerplant with hybrid turbos. SO it’s good for 0-60mph in 3s and will easily top 200mph.

The widebody kit also makes it sexier than Audi’s RS4 and it helped make MRC’s name as an international tuner.

Every tuner has done a great job on the B4, but MRC has to take the prize. 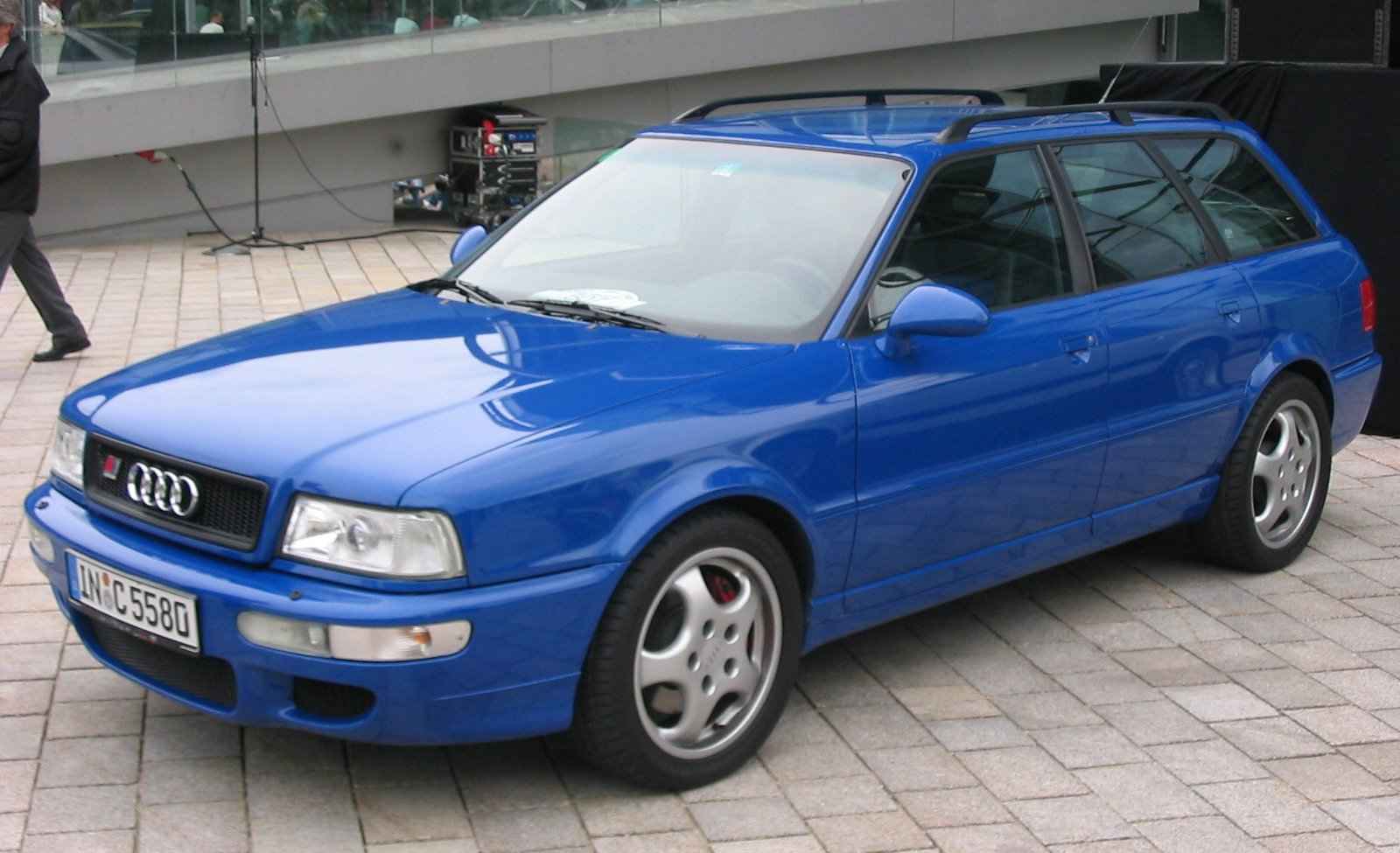 The old school Audi S2 warrants special mention, because it was the one that started this love affair with powerful Audi wagons.

Pogea Racing has taken things to a whole new level with its 810bhp version of the estate car with the Porsche influence to create a monster.

The 2.2-litre Inline Five is married to a monster Garrett turbocharger that ups the power to a thoroughly modern 810bhp+, dropping the 0-60mph dash to somewhere close to 3 seconds and allowing those brave enough to battle the Autobahn to go dangerously close to 200mph. 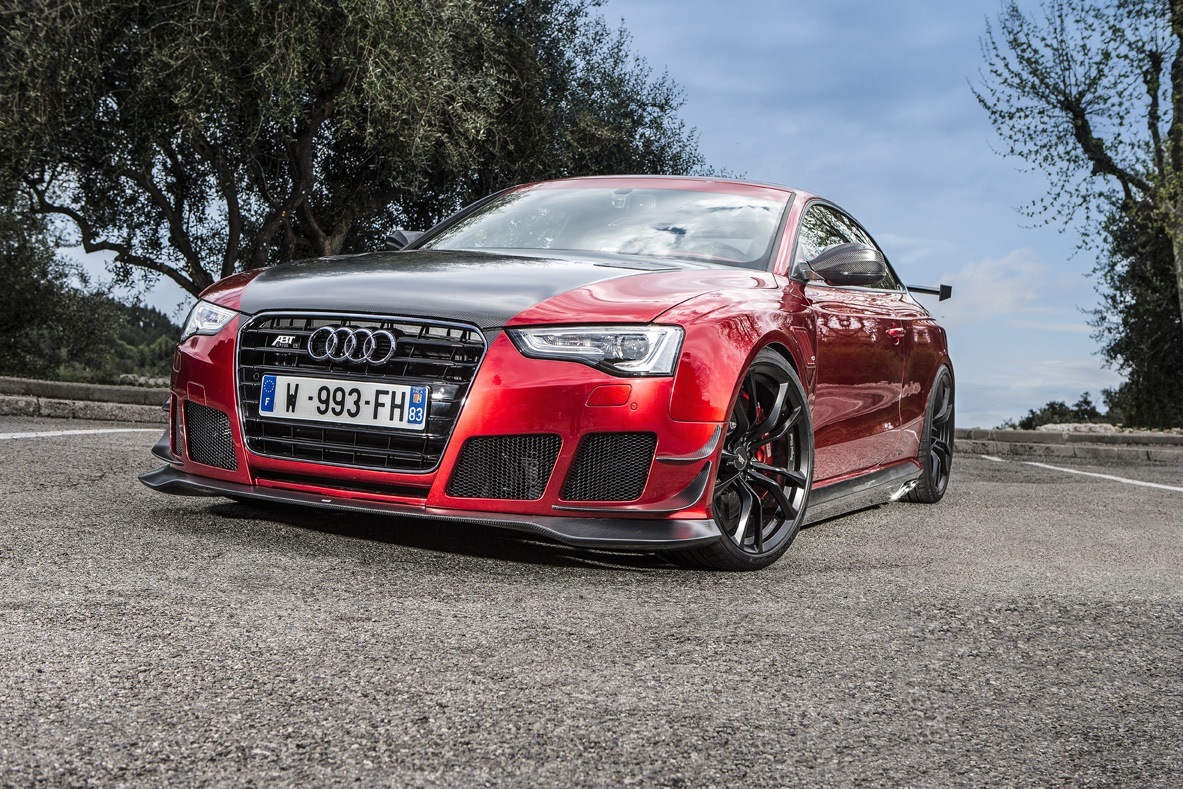 ABT Sportsline was in the running with at least three models on this list, which isn’t a huge surprise. Arguably the world’s most famous Audi tuner, the German company has engineered five DTM Championship winning cars as well as churning out some of the most well sorted tuning packages for the rest of the range.

The RS5 was a monster to begin with, but when Abt was finished it was a 470bhp touring car that hits 60mph in 4.3s and went beyond 200mph.

Carbon-fiber body parts reduce the weight and the interior gets the stripped out treatment. It’s overkill for a big, comfortable sportscar, but then that’s what tuning is all about.

Driving the RS5-R makes pretty much every big saloon feel plain, too, and banishes forever the thought that big Audis cannot be driver’s cars. The aerodynamic flips on the front splitter might me optimistic, aerodynamics alone will struggle to pin this car to the deck. But the wings, stripped out interior and rollcage all add to the sense of theatre. The engine tune really isn’t that big a deal, but the looks, man the looks…

It’s one of those cars that makes no logical sense, but to drive it is to want it. 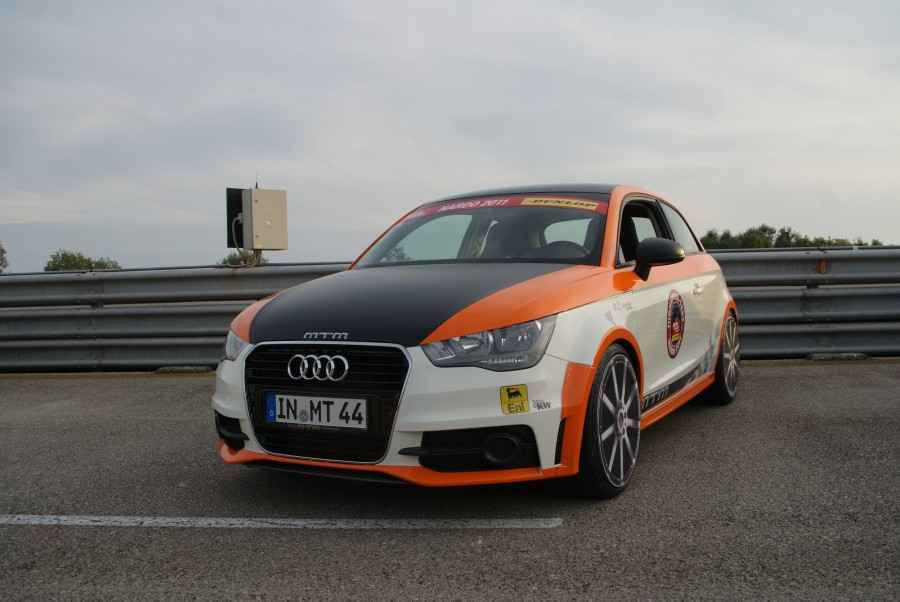 Audi’s A1 hasn’t garnered that much attention, apart from the limited edition Quattro. But before that car hit the headlines, MTM boss Roland Mayer was up to his old tricks by sticking a TT RS engine in to this one.

And while Audi felt the need to play safe with a Quattro system, Mayer decided to keep this one front-wheel-drive. So when his driver took this machine to 201mph on the Nardo high-speed bowl in Italy, it was, frankly, insane.

In the dry it kind of works, in the wet the front wheels were hopelessly overpowered by 500bhp. So MTM turned to Michlin to create a special tyre.

But there’s no doubt this is the hottest hatch on the market right now, even if there is only the one. At $140,000 you’ve got to really want a hot hatch sleeper, but then it is unique.

Author Nick Hall is a long-time Audi afficianado who has written for Motor Trend, Jalopnik, VW Parts Vortex, and others. Nick currently lives in Spain, but was born in the UK. Nick has had the pleasure of driving all sorts of vehicles, from antique race vehicles to fire-breathing production cars. Here are his favorite tuned Audis.