A car named after a greek sun god, the Phaeton isn’t a vehicle we see much on American roads. While seemingly invisible to some, the Phaeton is epitomized class. Designed to evoke envy and made for performance, the Phaeton is a serious luxury car. This ride has incredible lines and awesome features, making it a definite “status car”, but where did it come from? Here’s a history of the Phaeton as it was introduced to the world, and how it’s going to make its way back to the United States.

The Competition that Inspired the Phaeton

When Ferdinand Piëch dreamed up the Phaeton, his motivation was to make a Volkswagen that would take down Mercedes-Benz and BMW — the German luxury car world leaders. When Mercedes started offering the A-Class, a low-cost line, it gave VW direct competition, and the gauntlet was thrown. 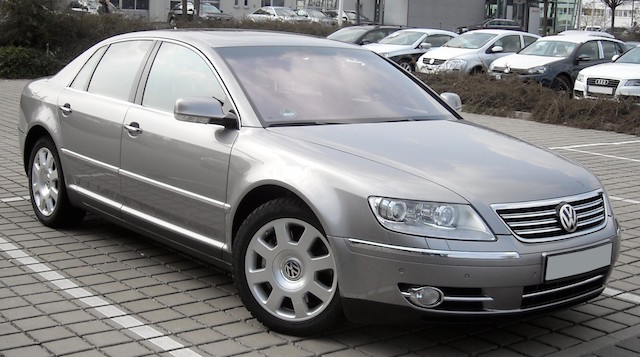 When Mercedes-Benz rolled out the A-Class, they were not looking to compete within their own lineup; they wanted to reach for a different kind of driver. The model was made to be less expensive and offer a lot of sporty features without all of the frills…the model was made to poach customers from VW.

Why was Mercedes-Benz trying to reach into another class instead of sticking to what they know? For the same reason Volkswagen had been working so furiously to broaden its brand. Both auto makers wanted to play in all fields across the automotive board.

So Volkswagen’s response to the A-Class was to hit Mercedes-Benz where it hurt and roll out a car to compete in the upper crust of the market. The Phaeton was their way into this market — pitting it against full-size luxury cars like the Mercedes-Benz S-Class, BMW 7-Series, and even its own cousin, the Audi A8.

A Car to Conquer the Market

Introduced at the Geneva Motor Show in 2002, this premium class VW is now marketed worldwide. However, the world (unknowingly) got its first peek at the Phaeton during the International Motor Show in Germany in 1999. VW presented the prototype as the Concept D — which was basically a hatchback Phaeton concept. The idea behind the Phaeton was born inside the mind of the chairman of the VW Group, Ferdinand Piëch.

In addition to bringing a car to the market to make luxury auto makers squirm, the Phaeton was developed to improve the brand image overall. Prior to the release, the most expensive VW model was the Golf GTI, which offers fierce competition in the sport compact market. The Phaeton takes a seat directly next to the Mercedes-Benz S-Class and Lexus LS, a more comfort-oriented vehicle to fill out the VW fleet.

Early Development of the VW Phaeton

Initially, the project was known as the VW611, an internal VW code for the development. Engineers and designers were given specific parameters this model needed to meet to satisfy the need in the lineup. These parameters included a 186 mph capability with ease (limited at 155 mph), an internal cooling capacity of 72 degrees Fahrenheit with an outside temperature of 122 degrees Fahrenheit, and an extreme torsional rigidity. Beyond this, the developers and engineers remained tight lipped about the standards that went into the build. However, judging by these, the rest of the items must have been bar raising as well.

Once the parameters were satisfied, production began in an eco-friendly glass factory in Dresden, Germany. The car is hand assembled while the body is fabricated and painted in Zwickau, Germany.

So, what’s the big deal about this car? It’s a fairly impressive machine, made with over 100 patented features specific only to the Phaeton. Of these, a draftless four-zone climate system with 25 computer-controlled servo motors to control the temperature without direct air (unless you want it) and a Torsen based 4motion all wheel drive system are worth noting. It’s also equipped with the exclusive Adaptive Air Suspension with Continuous Damping Control suspension, and it’s the first Volkswagen with radar adaptive cruise control, also called Automatic Distance Regulator. 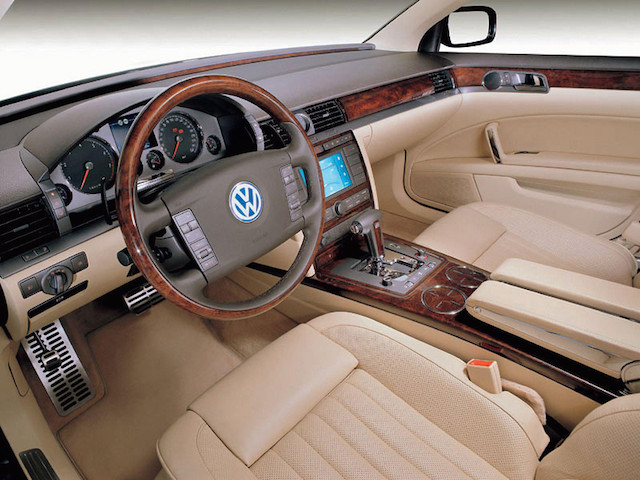 The interior of the Phaeton debuted as one of the most luxurious in the world. VW made sure to offer plenty of leg room for rear seated passengers, leather, wood, and chrome accents, and the previously mentioned patented four-zone climate control.

Seating is made to the highest luxury standards — supple leather with 18-way power adjustment points for the driver and 12 for the passenger. The front seats are also heated, air conditioned, and offer a massage function.

The infotainment system was dubbed as being “less confusing than other approaches,” not bad considering the pioneering nature of the system. It featured a 7” screen for navigation with push button controls for the stereo, climate control, and trip counter. It also had a 6-disc CD changer tucked away in the glovebox. 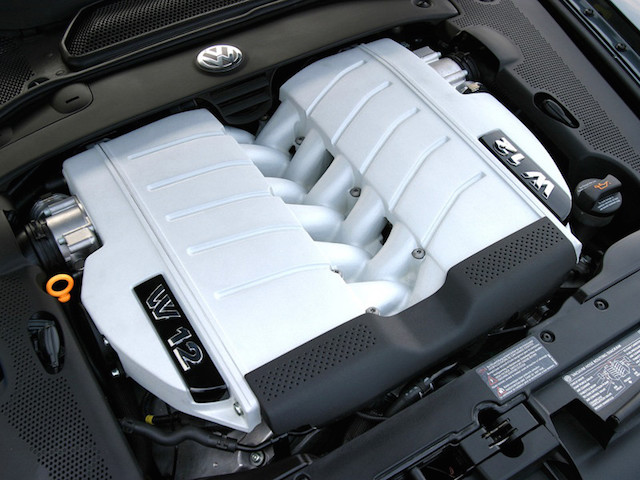 As of its last model year in the U.S., 2006, it was available as a V8 with 6-speed shiftable automatic transmission. The combo offered a somewhat underwhelming 14/21 city/highway mpg fuel economy. This five seater was run by 335 horsepower and 317 ft-lbs of torque, and was designed with many creature comforts in mind.

An Early Exit from the U.S. Market

The car was not received well by the American market, despite the unique features of the Phaeton. Initial sales failed to meet expectations and the model continued to fall short. The capacity was projected at 20,000 units a year, but only 25,000 were built from 2006-2010. In the United States, just over 1,400 were sold in 2004, while only a few hundred were purchased in 2005 — causing VW to pull the model from the U.S. market after the 2006 year model. 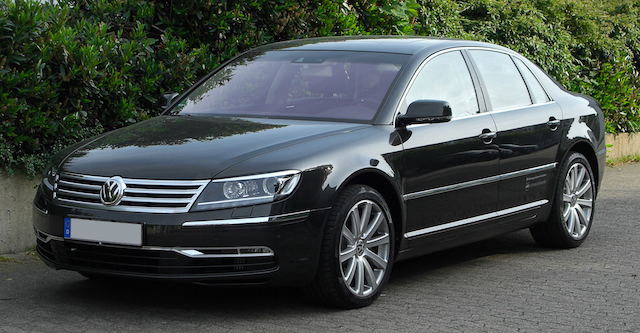 It came to the market with everything you’d expect — the luxury, the technology, the comfort, a smooth ride. So what was it missing? Many point to the fact that VW isn’t associated with the luxury market. Could that be it? Just the missing high end nameplate gave the Phaeton its walking papers?

In an original article on the VW Phaeton, Road and Track dubbed the vehicle as being a “tough sell”, citing the dismal sales overseas and its likeness to the Passat. Basically, it’s not a flashy looking vehicle, so people who purchase it wouldn’t turn as many heads as the more “obvious” luxury cars. In the same article, they did, however, dub it as a worthy alternative in the ultra-luxury class — a fact that American drivers seemed to overlook.

Want to pick up a used Phaeton today? Well, there’s good news for you as a buyer. All year models are at a huge depreciation from the original $60-$100k price tags. That’s a lot of luxury and a highly-rated car for not a whole lot of cash. Plus, if the Phaeton comes back to the market and is a hit, you could have more than just a bargain luxury car on your hands – you may actually have a collectible in the garage. So if you’re thinking of picking one up, now is a good time for it!

VW To Bring the Phaeton Back the U.S.

While VW is busy developing a second generation U.S. Phaeton, they’re not exactly rushing it to the market, putting an expectancy of 2018 or 2019 on the table.

When it gets here, it’s likely to be available as a gasoline-electric/plug-in hybrid with a V6 and electric motor connected to a lithium-ion battery pack. Like most hybrids, the electric motor will only power the vehicle for a short amount of time — but working with the V6 engine, the new generation will get about 400 horsepower. European buyers will have the option of a 450 horsepower TDI turbo diesel V8 and W12, but neither of these engines have been confirmed for the American market.

Volkswagen has hinted that it will sit on the same MLB platform found under the Audi A8 and Q7, as well as the VW Touareg. It will also be constructed of light-weight materials to make it as trim as possible. The new generation will start out at an approximate price point of $70k. 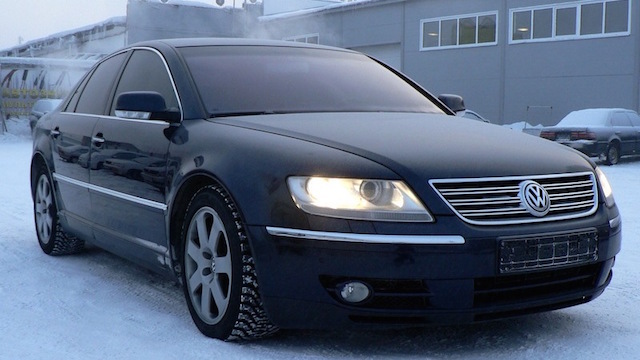 When the Phaeton returns to the U.S. VW fleet, it may have a better reception than it did a decade ago. The VW brand is moving up the food chain and is competing better in the U.S. market today than it historically has before. Volkswagen also seems to have a better understanding of what the American driver wants — style, power, efficiency, luxury, and the ability to make the guy in the right hand lane drool as you leave a stoplight.