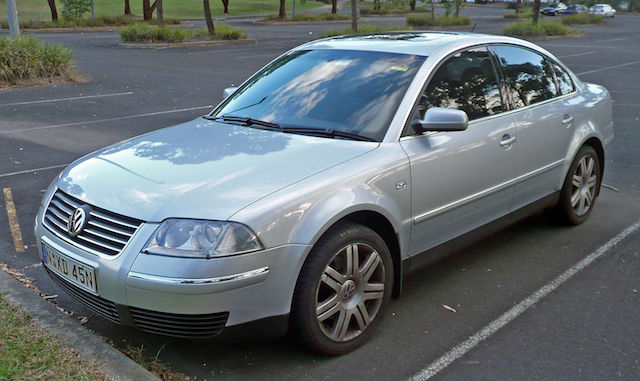 With its comfortable interior and great MPG, it’s no surprise that the Passat has been one of the most popular Volkswagen models since the 1970s. Many view it as a reliable car, but that doesn’t mean that it’s entirely free of faults.

If you drive a 2003 Passat, you might want to know the five most common engine problems that come with this certain year, make, and model.

Let’s start with the most common engine problem found in ’03 Passats, which are…

If the engine in your Passat starts to overheat, stop driving and take it to the nearest mechanic because it could be running on oil sludge. Unless you’ve neglected to change your oil for ages, this issue is likely not your fault.

Your 2003 Passat has a 1.8 liter turbo engine that’s designed in a way that allows oil sludge to form. If left undetected, the oil sludge can completely destroy your engine.

According to the fellow 2003 Passat owners over at CarComplaints.com, this serious issue usually happens at the 80,000-mile mark and may run you up around $2,800 in repairs.

This is such a frequent problem that there was a class action lawsuit settlement in 2010. Thanks to the driving forces behind the lawsuit, you are entitled to a 100% reimbursement from Volkswagen for engine repairs or replacements caused by oil sludge if you can prove that your Passat has been undergoing routine oil changes. If you can’t supply proof, you will still receive a 50% reimbursement.

Usually, the only way to fix this and get your trusty ol’ Passat back on the road is to replace the engine. However, if the sludge is detected early enough, your engine just might be saved. In such a case, you will need to completely flush out the oil sludge and, as a precaution, replace the oil pump to prevent your oil from mucking up again for a long time.

How to prevent this problem: Check your oil in between routine oil changes and change the oil once you detect a hint of sludge. Also, always use 100% synthetic oil as required by the owner’s manual.

The culprit here is the oil pump. A few Passat owners at CarComplaints.com found out the hard way that the oil pump that came with this car is weak and does not provide adequate pressure. They also mentioned that the oil pump’s underperformance starts affecting the engine when it hits about 85,000 miles.

Some symptoms include the “low oil pressure/stop engine” light coming on and a rattling sound coming from the engine. When caught in time, the issue may be fixed just by replacing the oil pump. However, it must be done immediately before the faulty oil pump kills the entire engine.

How to prevent this problem: Check your oil in between routine oil changes to ensure that it’s at an adequate level. If you find your Passat constantly low on oil, replace the oil pump as soon as possible.

Your engine will start acting up once your ignition coil goes haywire. It may crank loudly, hesitate before starting, backfire, vibrate, or stall. Other symptoms include decreased gas mileage and increased emissions.

Some ’03 Passat owners reported that the ignition coil normally fails at 61,000 miles. The vast majority of them successfully fixed the problem just by replacing the ignition coil. Others also needed to replace the mass airflow sensor or the spark plugs.

How to prevent this problem: Replace your spark plugs as recommended by the owner’s manual or before your Passat hits 50,000 miles.

How to prevent this problem: This issue arises because the overhead valve cover gasket is prone to wear and tear, so it’s always a good idea to check it on a regular basis and immediately replace it once it shows damage.

5. Worn Out or Broken Motor Mounts

Replacing your motor mounts may set you back $870 at a shop, but it’s much better than dealing with an engine falling out of your car.

As a Passat owner, you should be aware of this problem because it’s the fifth most common engine-related ’03 Passat issue on CarComplaints.com.

The best way to know if your engine is loose due to worn out or broken motor mounts is paying special attention to the way the car feels while in motion. The car lurching or jerking during the shifting of gears (from park to reverse, for example) usually means that you should have your motor mounts checked as soon as possible. If your motor mounts need to be replaced, you can always go on our website and purchase some new ones straight out of the Volkswagen factory at a discount.

How to prevent this problem: Replace the motor mounts every 7 years. Also, continuously ensure that nothing under the hood is leaking, as any fluid leak can get on the mounts and significantly shorten their lifespans.