In 1974, tough economic times and lagging Beetle popularity meant Volkswagen needed something new. So, for the 1975 model year, they brought Europe's popular front-wheel drive Golf to the US as the Rabbit subcompact.

The Golf is one of VW's longest running US nameplates, with roots over 40 years deep. Take a look back at how both the style and the price of this beloved VW have changed: 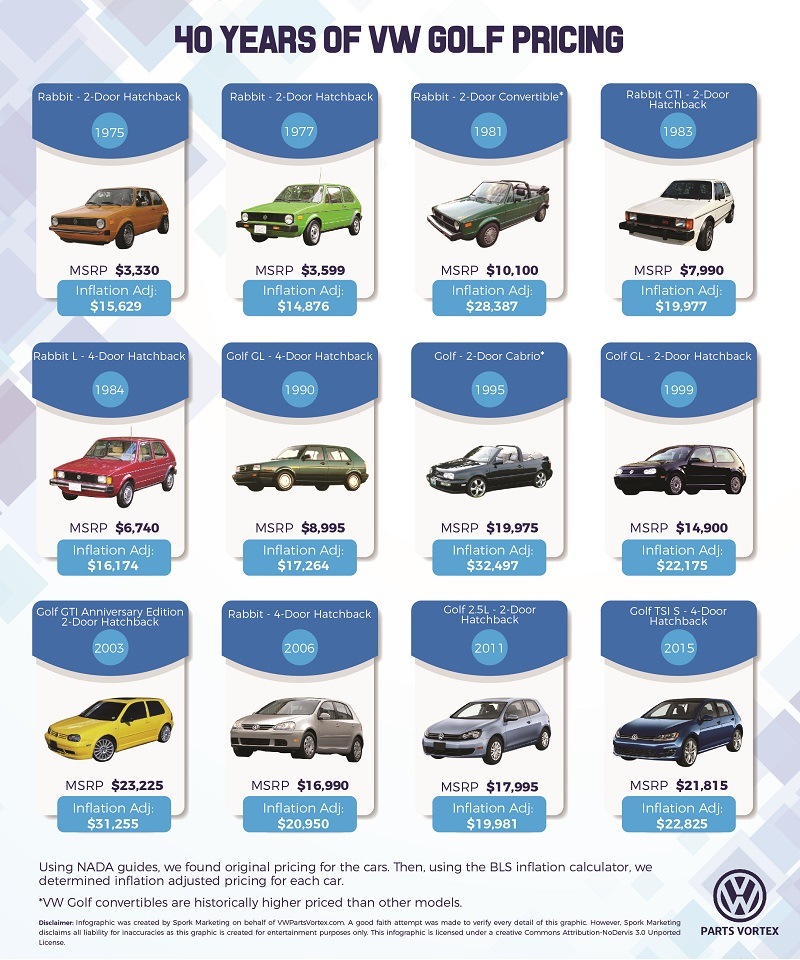 A running start: During the Rabbit's early years, auto journalists at both Autoweek and Car and Driver seemed pleasantly surprised by the driveability and performance of VW’s new hatchback. According to Volkswagen, approximately 1.5 million Rabbit derivatives were sold in the US from 1975-1984. Those first 10 years solidified its place as a popular economy car.

Fun fact: Of those 1.5 million sales, a handful went to a police fleet in Greensboro, North Carolina. When the tales of these hatchbacks helping the law chase down criminals at speeds of 100+ mph got out, Volkswagen used the stories to create both print and TV ads.

A note about the Cabriolet: Of course, most car makers charge more for convertibles and Volkswagen was no exception. Although there’s no clear reason for the substantial price difference, here are some cost considerations:

What's in a name? In 1985, the US version of VW's hatch adopted the Golf nameplate. Over the next 10 years, the price of these cars, their wheelbases, and their performance capability grew. By 2006, the Golf MkV was, once again, marketed in America as the Rabbit. The Rabbit identity stuck until 2010, when the name was reverted back to Golf.

Does it still compete? Continuing innovation and a variety of options and trims have moved the price of some Golf models higher than others. However, a 2017 VW Golf base model starts at $19,895, which is less than $5k higher than the price of 1975's Rabbit. When you think of all the extras today's cars have, that's a pretty sweet deal, and it puts the Golf in line with traditionally more affordable brands such as Honda, Mazda, and Ford.

Today, the Golf is as popular as ever, with four Golf models making Car and Driver's 2017 "10Best" list: the Golf, Golf Alltrack, Golf GTI, and Golf R. We look forward to where the Golf will be 40 years from now.