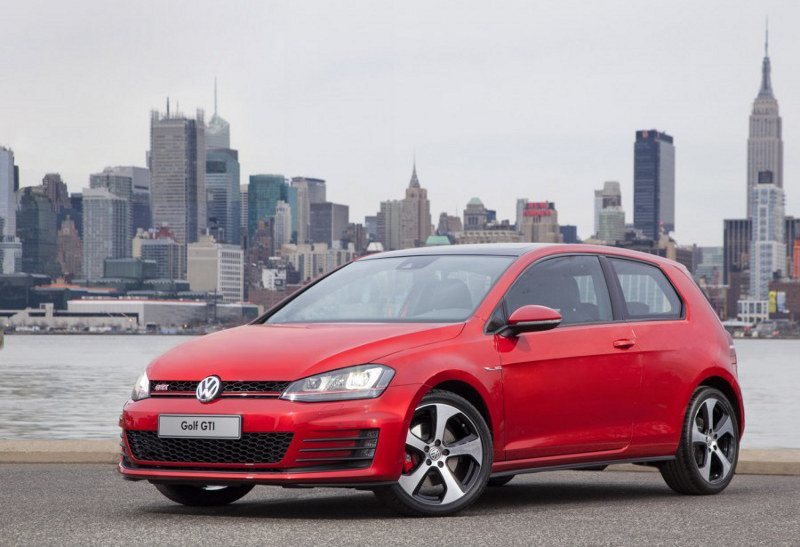 The 2015 Golf GTI posing in front of the NY skyline

While the vehicles themselves aren’t new (they’re the same as the Euro-spec Golfs, which have been seen at European auto shows for a few months now), the announced engine specs were absolutely newsworthy. From LeftLaneNews.com:

Three powertrains will be on offer: A 1.8-liter turbocharged four-cylinder gas engine, a 2.0-liter turbodiesel four-cylinder, and a 2.0-liter turbocharged four-cylinder in the GTI.
The 1.8-liter unit cranks out 170 horsepower and 184 lb-ft. of torque and it will be mated to both manual and automatic gearboxes. Golf TDIs receive a new turbodiesel rated at 150 horsepower and 236 lb-ft. of torque. In addition to making more power than the outgoing Golf TDI’s engine, the new diesel should be more fuel efficient. A six-speed stick is standard, while VW’s DSG dual clutch automatic will be optional.
North American-specification GTIs will crank out 210 horsepower and 258 lb-ft of torque…

While the Euro-spec GTI’s are rated about 10hp more than the US model’s 210, it’s promised that we’ll get an extra 10hp at some point in the future.

Unfortunately, there’s still no word on pricing, fuel economy, or the official debut date. All we know for sure is that the new Golf is still about 1 year away.